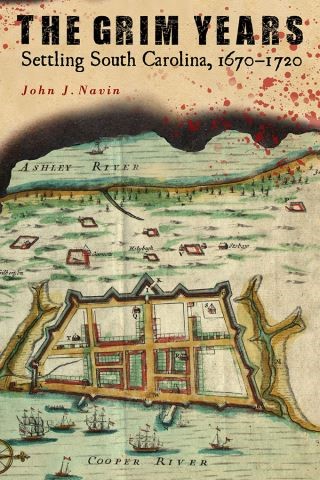 The Grim Years: Settling South Carolina, 1670-1720 is a graphic account of South Carolina's tumultuous beginnings, when calamity, violence, and ruthless exploitation were commonplace. With extraordinary detail and analysis, John J. Navin reveals the hardships that were experienced by people of all ethnicities and all stations in life during the first half-century of South Carolina's existence—years of misery caused by nature, pathogens, greed, and recklessness.

From South Carolina's founding in 1670 through 1720, a cadre of men rose to political and economic prominence, while ordinary colonists, enslaved Africans, and indigenous groups became trapped in a web of violence and oppression. Navin explains how eight English aristocrats, the Lords Proprietors, came to possess the vast Carolina grant and then enacted elaborate plans to recruit and control colonists as part of a grand moneymaking scheme. But those plans went awry, and the mainstays of the economy became hog and cattle ranching, lumber products, naval stores, deerskin exports, and the calamitous Indian slave trade. The settlers' relentless pursuit of wealth set the colony on a path toward prosperity but also toward a fatal dependency on slave labor. Rice would produce immense fortunes in South Carolina, but not during the colony's first fifty years. Religious and political turmoil instigated by settlers from Barbados eventually led to a total rejection of proprietary authority.

Using a variety of primary sources, Navin describes challenges that colonists faced, setbacks they experienced, and the effects of policies and practices initiated by elites and proprietors. Storms, fires, epidemics, and armed conflicts destroyed property, lives, and dreams. Threatened by the Native Americans they exploited, by the Africans they enslaved, and by their French and Spanish rivals, South Carolinians lived in continual fear. For some it was the price they paid for financial success. But for most there were no riches, and the possibility of a sudden, violent death was overshadowed by the misery of their day-to-day existence.